As Presenting Partner of the Sydney Symphony International Pianists in Recital series, it has been an exciting start to the week with this fantastic series that will run until November at City Recital Hall, Angel Place.

Commencing with Italian pianist Alessio Bax who thrilled the audience with his thoughtful interpretations of Bach to Listz, we were honoured to work with him during the pre-concert preparations (as pictured below).  Ara’s ability to work closely with the artist allows him to create the perfect sound and tone colour for the program. Our work included a selection tune followed by a detailed discussion and final touches, to create the exact requirements for the evenings repertoire.

Alessio came to world prominence with First Prize wins at both the Leeds and Hamamatsu International Piano Competitions. He is known now on four continents, not only as a recitalist and chamber musician, but as a concerto soloist who has appeared with more than 100 orchestras.

Music enthusiast Fraser Beath McEwing shares a glimpse of the evening.“The Rachmaninov Variations on a Theme of Corelli, which preceded interval, was the highlight of the concert for me. And not just because, according to Vladimir Ashkenazy, this is Rachmaninov’s ‘most eloquent composition’, but because Bax took it to an inspired level of interpretation, with no sign of technical stress. He was able to switch moods throughout the 20 variations plus coda, teasing out the rich Rachmaninov harmonies and setting off fire crackers when called for by the score”.  To read more of this review, click here 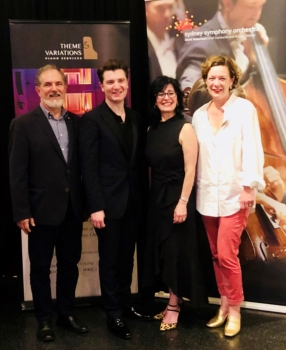 A sneak peak into our Workshop!